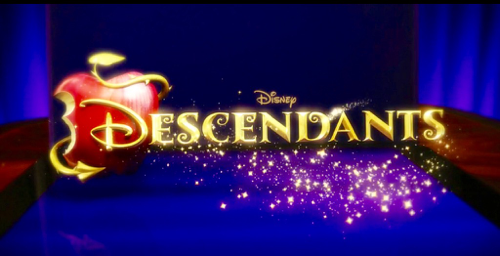 20 years ago, Belle from Beauty and the Beast married Beast and he united all the fairytale kingdoms and he and Belle became King and Queen of the United States of Auradon.Then he put all the villains in in an island prison named the land ‘the Isle of the Lost’ they were sent there for their so called crimes. Years later Beast and Belle’s son, Ben was going to be crowned king. He announced to his parents that the children of the villains should be given a chance to live a normal life in Auradon. Belle agrees, but it took them some time to convince Beast. Meanwhile in the Isle of the lost, Mal daughter of Maleficent, is spray painting walls, Evie (daughter of the evil queen) is strutting on tables and Jay (son of Jafar) and Carlos (son of Cruella Di Vil) are causing havoc with every step they take. Right after Mal steals a lollipop from a baby her mother arrives and tells them about Ben’s announcement, and also about her evil plan to have them use their trip to Auradon to steal the Fairygodmother’s magic wand to free the villains from the Isle so they can have their revenge on their enemies. We follow the villain children to Auradon, and the mischief they create in their wake.
END_OF_DOCUMENT_TOKEN_TO_BE_REPLACED

Posted by KR on September 4, 2016
Posted in: Author. Leave a comment 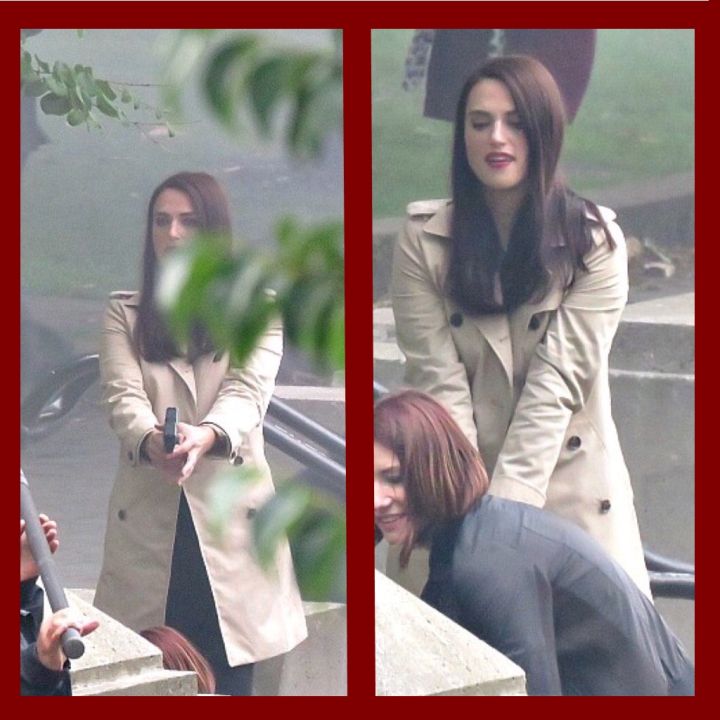 We are really excited that Katie has been cast in The CW’s Supergirl as Lena Luthor. I have really enjoyed the first series of Supergirl , so with Katie joining the cast will make the program amazing!! I found out that Lena is described as a beautiful, powerful, and enigmatic woman, which Katie describes Katie […]

When the first season finale of “Galavant” aired, fans began a #RenewGalavant campaign; knowing full-well that the show would have to beat some great odds to come back for another season. But, surprise! “Galavant” did come back. Season Two ended with one of the most satisfying and fun ending in all the seven realms.

Shortly afterwards, fans once again took to the social media platforms with their #RenewGalavant posts. Then, mere weeks before ABC was scheduled to announce its show schedule for the coming year, Karen David (‘Princess Isabella’ on “Galavant”) started to cheer on the fans. She joined the campaign and added her own flair by tagging posts with #MoreGalavant, motivating fans to write physical letters to the network president and programming director (she even supplied the mailing addresses fans would require to complete the task), and she cheered on fans as a petition was created and shared across the social mediums.

Fans grabbed onto anything that gave them a chance to do ‘something’ in an attempt to save their beloved show. On Friday, May 13th ABC announced ahead of its Upfronts in New York that they had decided against renewing “Galavant” for a third season. The fans ultimately turned their campaign towards finding a new home for the medieval fairy tale comedy. Again, Karen found a way to focus fans with her tagged ‘To D’DEW lists’ which included how to contact Hulu, Netflix and Amazon to try and sway them to pick up “Galavant”.

In most recent days, the #MoreGalavant campaign has gained an impressive momentum that includes more than 18.5K signatures on the petition, fan votes that have made “Galavant” number one in People’s Choice poll, and two other online award nomination campaigns (Teen Choice and Voice of TV). All of these are ongoing for a few weeks, and all fans are encouraged to sign, vote and nominate. Visit Karen David’s FaceBook page for the details and links.

Another great surprise has been in the support fans have received from celebrities. The #MoreGalavant Thank You video that was created, featured Billy Boyd (Can’t Eat This Hobbit), Damien Sandow, ‘Weird Al’ Yankovic (Feel The Power of The Hashtag) and Mark Hamill (GalavanTerrific). Other celebrities that have supported the fans are Maggie Lawson, Dulé Hill, James Roday (Timothy Omundson’s friends and cast mates from “Psych”), Paget Brewster, Zachary Levi, William Shatner and David Prowse (Darth Vader himself). Online entertainment news outlets have also picked up on the campaign with Entertainment Weekly and Examiner.com doing a few really great interviews and write-ups.

What’s next for the #MoreGalavant campaign and “Galavant” fans? Well, the Voice of TV Award nomination phase closes June 3rd, with voting beginning June 6th. With luck, “Galavant” will have a nomination or two, the People’s Choice poll closes July 1st and fans can keep voting up to that date, and the petition is always open for signatures and comments. All of the above will be used to sway network executives when meetings with decision makers begin in a few weeks (according to Karen David’s messages).

(All links to: “#MoreGalvant Thank You Video, iPetition and voting polls are found on Karen David’s FaceBook page link above.)

At the end of this writing, the iPetition is up to 18,968 signatures and “Galavant” Chef Darren Evans has promised a video of his dance moves if it gets to 20K. So, add your support with a signature and #FeelThePowerOfTheHashtag with #MoreGalavant. 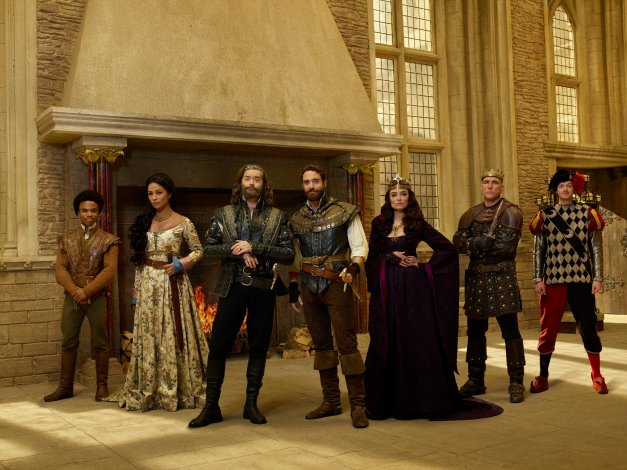 “Eye to Eye” Slasher, Episode One Full Recap and Review

Heyla and welcome to K’Sennia Visitor’s review of “Eye to Eye,” the first episode of the Chiller original series, Slasher. This is just going to be me watching the show for the first time and writing down my thoughts as I go.

Warning this will include spoilers for any part of the show you haven’t seen yet.

The episode starts at Halloween, 1988, with a husband dressed as a cowboy, and his very pregnant wife, who has just gotten up after a very unsuccessful afternoon nap. I thought it was really weird she was wearing her nightgown for a nap. I guess she was just weird. She’s also still really tired and doesn’t want to go to the Halloween party with her husband and hubby’s best friend.  Hubby offers to stay home with her but she doesn’t want him to, then the doorbell rings…

… and this handsome guy in his best serial killer costume is standing there. Hubby thinks its his friend so lets him in. Serial killer doesn’t say anything just stands there and does his best to look menacing and mysterious. Hubby starts to get a little freaked out, then his real friend shows up and he realizes too late, as the serial killer’s sharp blade slices through his abdomen, that he probably shouldn’t have let this guy in his house.

END_OF_DOCUMENT_TOKEN_TO_BE_REPLACED

An Interview with Timothy Omundson

Interview Conducted By Kelly-Marie for WeLoveTV.me

Kelly begins the interview by asking Timothy some questions from her thirteen-year old daughter, AJ.

KELLY: My daughter has a couple of questions the she wants to know first. She’s thirteen and she always asks these little questions for every single interview.

KELLY: She would like to know: if you could be a dinosaur for a day, what dinosaur would you be?

OMUNDSON: Pretty basic idea. I mean, why would you want to be something that’s not the highest predator in the land?

END_OF_DOCUMENT_TOKEN_TO_BE_REPLACED

The AI (maybe of the creator herself) is hidden within the black blood (Nightblood) of the commanders (past/present/future).

I feel that the black blood may make Lexa immune to Ali’s effects, or at the very least allow her to enter the city of Light safely, or unaffected by the obvious mind control that’s going on right now in Arcadia, to take Ali down.

The 100 WanHeda Part One

Firstly, a quick thank you to: Jason Rothenberg the creator of The 100 TV Show, which is based on the books by Kass Morgan. (Thank you Kass!)

WanHeda part One opens where last series left off, John Murphy in the fall out bunker where we learnt that a computer AI had caused the destruction of civilisation.
He is trapped inside by the aforementioned artefactual intelligence: The evil ALI; so she can get her claws into Jaha. (I personally don’t like Jaha, I never did, he’s rather self-righteous and only does what will benefit himself). John just about goes insane trapped for over eighty days on his own.
Richard Harmon’s acting abilities are taken to a whole never level! He is amazing and should win awards for his performance!!